Here are a few recipes from our kitchen – agoldshop – for you to try at home – and maybe make a few improvements of your own, test other ingredients or add different spices. Have fun! 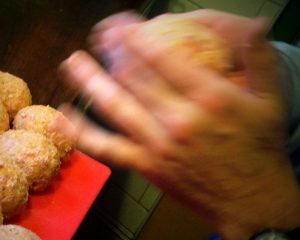 We make our Scotch eggs fresh every weekday. They are satisfying, truly delicious and have a loyal (some might say fanatic) following – we sell dozens a day. Try yours, as we like them, cut in half with a dollop of hot English mustard.

Royal grocer Fortnum & Mason claim to have invented Scotch eggs in the 18th Century. One sleepless night, I decided to take them from such majestic beginnings into our own humble kitchen. After a couple of attempts I got the knack of it and I’m sure you will too. Here is the recipe:

Ingredients:
5 free-range eggs, at room temperature – one of them beaten with a little water in a small bowl
500g of good quality sausage meat
1 tsp of dried mixed herbs
1/2 tsp of ground cumin
1 tsp of ground turmeric
1 tsp of paprika
A pinch of chilli powder
3 tbsp of plain flour
5 tbsp of breadcrumbs
Vegetable oil, for frying

1 – Place the four eggs carefully in a pot of fast boiling water. After 8 minutes, remove the eggs from the pot and cool them down immediately in a bowl under running cold water. Once cold, peel and reserve.

2 – Season the sausage meat with the ground spices and mix well. Divide the mixture into four equal portions, rolled into balls.

3 – Flatten each ball with the palm of your hands, then place a boiled egg in the centre. Work the meat around the egg until it’s evenly distributed and smooth.

4 – Lightly coat each Scotch egg with plain flour, then dip in the beaten egg and finally roll in the breadcrumbs. Leave in the fridge to rest for half an hour, then deep fry in the vegetable oil for 10 minutes at 160c. 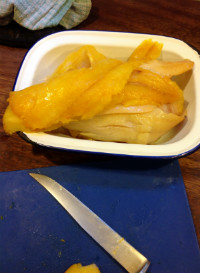 1 – Fill a large pot with plenty of water, then add the curry powder, ground turmeric, cinnamon stick, cloves, bay leaves and cardamom pods. Bring it to a boil, then lower the heat and poach the haddock fillets in it for a few minutes – until just cooked through. Scoop the fish out of the water and reserve.

2 – Bring the water back to the boil, then add the rice. Give it a quick stir and let it cook for 10-12 minutes. Once cooked, drain the water through a colander and reserve the rice and spices.

3 – In a separate pot, boil the eggs to your liking. Cool them down, peel and reserve.

4 – In a large shallow pan, fry the onions and garlic in a little oil and ghee, then add the chilli. When the onions become slightly coloured add the cooked rice, peas, flaked haddock, sultanas and chopped coriander, stirring gently until all is mixed. Season with salt and lemon juice. Transfer to a serving dish and top with the boiled eggs cut in half.

This recipe was kindly given to me by the nice people from the Spurstowe Arms pub in Hackney (68 Greenwood Rd, E8 1AB), where I usually retreat after work to write this page and read the papers. The quantities here make 11 litres, so if you’re not giving too big a party, reduce them to your need. It’s so good though that you might keep as it is!

Combine all the ingredients in a large pot and simmer gently (do not boil) for about 15 minutes. Strain into heatproof glasses and enjoy!

The recipe for the Yorkshire pudding batter I found in Delia Smith’s Complete Cookery Course: 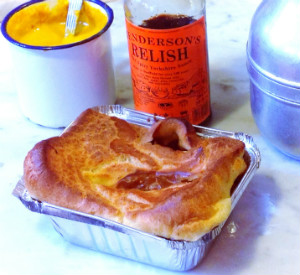 Mix all together well and free of lumps in a large bowl and set aside.

You will also need 8 sausages and about 4tbsp of beef dripping or duck fat.

1 – For the shop, we bake the toads in small individual aluminium dishes (13cm x 10cm x 4cm) but you could bake the four portions in one baking tray if you like. Spoon the fat into the dish or dishes, then put them in the oven (in a larger roasting tray) until the fat gets really hot.

2 – Meanwhile, brown the sausages in a frying pan or grill them until nicely coloured all around and almost cooked through.

3 – Remove the dish or dishes with fat from the oven and place two sausages in each individual dish or arrange all the sausages in one large dish and pour the batter over them. Place the dishes immediately back in the oven and bake until the Yorkshire puddings are well-risen, crisp and golden.

I was taught this recipe by an old Brazilian friend and now I call it mine. She calls it ‘Espanholita Preguiçosa’ and it is the most effortless supper idea I could ever wish for after a long day labouring in the kitchen!

Ingredients:
3lt of any stock you like (I like chicken) or just water – it’s fine
8 plum tomatoes
2 onions, peeled and cut into quarters
4 cloves of garlic
2 mugs of green lentils
2 bay leaves
a little olive oil
sea salt and freshly ground pepper

In a large pot, bring the stock to a boil and add the tomatoes (whole), onion halves, garlic cloves (unpeeled), lentils, bay leaves and season with sea salt and black pepper.

Turn the heat down to a simmer, drizzle with a little olive oil, then go and lay down on the sofa.

It should be ready in approximately 40 minutes – or when the lentils and vegetables are very tender. Before serving (if you’re not feeling too lazy), add chopped parsley and squeeze the garlic cloves out of their skins. I like sometimes to add a handful of broken vermicelli at the end or if you have any leftover ham or chicken, you can shred it and add to the soup too.